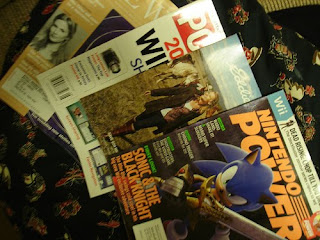 This week, I’m trying to get writers to stop whining about the downturn and move forward to find new, good-paying markets. One sure sign that the economy is finally looking up: New magazines are being born.

There’s been a few new magazines here and there, now and again, straight through the downturn. But in yet another sign that the economy is slowly starting to percolate again, in the past few weeks there’s been a raft of new-magazine announcements.

I wanted to talk about this development, because new magazines represent a unique opportunity for freelance writers. New magazines don’t have a stable of established freelancers yet! That’s a wide-open opportunity to jump in and form a bond with an editor at a time when they really need help shaping the voice and subject matter of what they will present in their new magazine. A relationship formed now could pay off in regular assignments from this new market for years to come.

On the down side, new magazines often don’t pay as well as established ones. But if you’re looking to crack the magazine niche, a new magazine might well provide that chance to parlay your daily or weekly newspaper clips to move up the freelance-writing food chain a notch.

Of course, pitching new magazines can require a bit more work than pitching long-established magazines. They often don’t have writer’s guidelines available, and it may be tough to find the editor. Their Web site may not even be up yet. They may not have even a sample mock-up to send you, and likely no sample issue.

But if you can do some research and make a connection, it could really be worth it. (Hints: Check their media kit for information about the audience they plan to reach…and/or get a sample issue if they have one to scan the masthead for names.) My experience is editors at new magazines are more open to working with less-experienced freelancers. After all, their publication is kind of a question mark too — many established writers might not bother, unless the magazine has very high-profile backers. If you have clips in a similar niche and some strong story ideas, you could find yourself in pole position to propose a column or to get a steady stream of article assignments.

Just to give you a taste, here are the new magazines I’ve heard about recently. Most of these came from just two weekly issues of my Wooden Horse newsletter. Where possible, I’ve done a quick look around myself and brought you what I could find in terms of background info and contacts.

Impact Magazine is a Houston-based business magazine debuting in August. This one may really take a little nosing around — I see about a million magazines are named “Impact,” and there is also a “Healthcare Impact” monthly magazine out of Houston.

Connected World is a tech-devices magazine debuting in June. CW seems to be connected to a conference of the same name. [NOTE: As of 12/2016, this magazine no longer puts its media kit up publicly – you can sign up for it here. You’ll likely have to do some extra legwork to query this pub.]

Positive Impact looks like it’s been going online, but is now crossing over to be a quarterly print publication as well.

Traveling with Babies & Kids is a new magazine due out in Fall ’10. Women’s-travel publisher See Jane Fly, which puts out The Travel Book, plans a 250,000 circulation.

Capital Business is a new weekly from the Washington Post, and its home page even has an editor contact! This is probably the most heavy-hitting of the new entries on this list.

Noticed any other new magazines? Leave a comment and let us know. Otherwise, put on your detective hats, get out there and make some new connections at new magazines!

This post originally appeared on the WM Freelance Writerâ€™s Connection.

For Freelance Writers, The Recession is Over -- So Start Your Marketing Engines