The Best Writing Job I Ever Turned Down 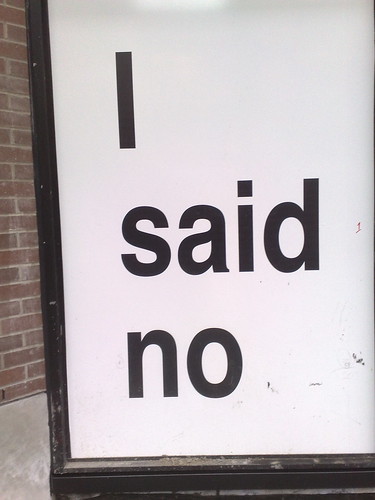 This is the story of the greatest freelance writing gig I ever turned down. It happened just last week.

About a year ago, I met an editor at a MediaBistro networking event who develops online content for a very large software company. Based here in Seattle. Yeah, that one.

In shmoozing him up, I discovered that he was best friends from childhood with one of my past editors…an editor who’d loved my stuff. He also knew another beloved editor of mine as well. To sum up, he was my dream prospect!

He didn’t have anything immediately, so for once I did a really good job staying in touch and following up.

And last week, he finally called me with an assignment. He needed someone to write a half-dozen articles, one a month, over the next six months.

The catch: It was on a brand-new version of one of their software programs. Hmmm…I’m not much of an early adopter, so I wasn’t using this new program yet. Small, dim alarm bells began to chime in the back of my head. But I was so psyched to work with this client!

We investigated a little more, and discovered the program doesn’t run on Macs, which is what I use. I’d have to buy a computer to do the gig!

At this point, the alarm bells were louder. In reality, the assignment would be for me to buy and break in a whole new computer AND software, and quickly become an expert in using it so I could write about it. I don’t ordinarily write a whole lot about tech.

I was starting to get the ugly, real picture. I wasn’t actually a fit for this gig.

If I took it, I’d stand a decent chance of sucking at it. And that is the one thing I don’t ever want to see happen. The last thing I need is to disappoint a client at a major corporation.

My hope is another assignment may come along from this client that’s a better fit for my background, which is mostly writing about a range of other business topics. Maybe I’m nuts and should have bought the computer and given it a whirl. But my feeling was the huge ramp time that would be involved to essentially acquire a whole new expertise area probably would have meant I earned less net in the end, as I’d have less time for other clients.

I’d also run the risk of alienating an editor and never getting any future assignments from him.

The whole experience was a reminder to me that writers need to not jump at every offer that comes down the pike, no matter how great they may sound at first. Ask yourself, “Is this assignment really me?” I try to stay with assignments where I can answer that with an enthusiastic “yes.”

Ever turn down a major gig? If so, leave a comment and tell us about it.